"God Our Father, Christ Our Redeemer,

the Holy Spirit Our Comforter, Humankind Our Family" 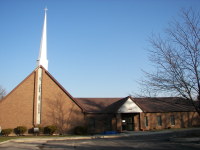 The mission of St. James A.M.E. Church is to effectively minister the Word of God to the people of God through biblical teaching, preaching and outreach. We are a church where each person can discover and use their spiritual gifts, sharing Jesus Christ with all people through Worship and Praise, Study and Development, Witnessing and Serving others, and Building up the Body of Christ.


St. James A.M.E. Church in Elgin, IL was organized in 1881.
St. James A.M.E. Church was established by the early Black settlers of Elgin as a result of their desire to participate in the old fashioned type of class meeting, rather than worshipping in the white churches of the community. As this desire blossomed, Abraham Newsome, Jane Friarson, and others who had been involved in the First Methodist Episcopal Church, as well as Blacks who had been involved in the First Baptist Church, gathered in the Newsome home and became on organized group. Shortly after this initial meeting, Mr. Newsome and his fellow Christian friends decided there was a sufficient number of Black Methodists in the city to maintain a church, and thus officially organized in the year of 1881. The above is the first documented recording of any attempt made to organize among Blacks for the purpose of forming a Methodist Church. Twelve persons were in attendance at this first meeting.

Services were held at the Elgin City Hall where permission had been granted for use of rooms in the Council Chamber. After becoming dissatisfied with this arrangement, a plot of ground was purchased at 303-305 Ann Street for the purpose of erecting a church building. The Reverend J.T. Nease was the Pastor at this time.

In 1887, the old Swedish Church at Dexter Avenue and Spring Street was purchased and moved to the site on Ann Street. The congregation now had a building of their own. In 1888, Rev. Hall, who succeeded Rev. Alexander, was sent to the Elgin church and at that time the official name, St. James African Methodist Episcopal Church was adopted.

In the historic year, 1888, there were 30 recorded members whose leadership included family names familiar to the Elgin community, as follows: Class Leader Abraham Newsome (grandfather of Edward Newsome); and Trustees Benjamin Downs (father of J.A. Downs); Rigdom Brown (father of Leon Brown); and Scott Smith (grandfather of Juanita Anderson). In addition to these families, St. James families included the Hardings and Halls.

The tornado which struck the City of Elgin in 1929, did damage to the original building. In 1930, through the efforts of Mr. Newsome and the Building Committee, the structure located at 305 Ann Street was started at a cost of $7,500. Total cash on hand was $5000. In order to pay off the church debt, many money making projects were held such as chicken dinners, which were sold at $.50 per ticket.

In the decades to follow, St. James remained the quaint, spiritual church that ministered to the needs of its youth through a strong Sunday School under dedicated leaders such as Robert Smith and Sis. Florence Allen, who served as Sunday School Superintendent for many years.

The finances of the church were looked after by Christian men serving as church treasurer , such as Bro. Carrol Williams, Bro. Willie Armstrong, Bro. Jack Steele and Bro. William Small. Sisters Jarnett Dill and Vivian Steele are the current Financial Administrators for our Church.

The Usher Board flourished and ushers were well trained under the leadership of devoted doorkeepers like Sis. Jennie Butz, Sis. Helen Belew, Sis. Juanita Hare, Sis. Marion Green, and Sis. Valerie Johnson , who all served as president of the Usher Board. Bro. Mark Steele is the current Usher Board President.

The Senior Choir has ministered to the congregation with early choir members, such as Russell Allen, Floyd Hozier, Drucilla Pride and Rosie Cole. Under the direction of longtime choir director, Sis. Jeri Smith, organist Sis. Bettye Lewis and the other musicians, the choir remains a strong ministry in music.

In 1982, under the leadership of Rev. Charlie Carpenter, the church went forth with plans to build our present building. By the Grace of God, much hard work and a few dedicated souls, we were able to finance our present building with the help of influential friends and Faith United Methodist Church. We moved to our beautiful new sanctuary on January 27, 1991 under the leadership of Rev. Blaine Ramsey, Jr.